The Biggest Myths About Moving To The Suburbs 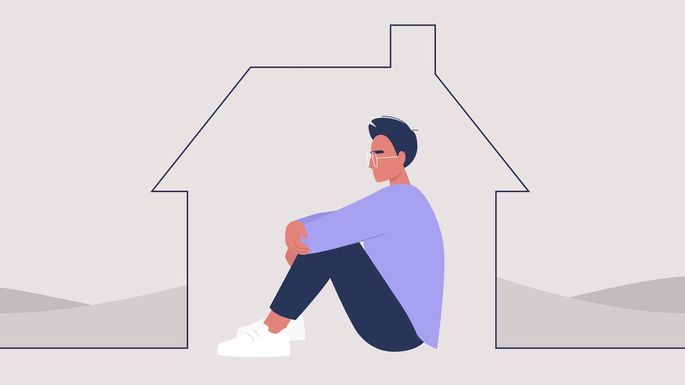 For generations, people have been drawn to big-city life by the irresistible lure of career opportunities, cultural riches, and the sheer excitement of rubbing shoulders with hundreds of thousands—even millions—of people doing varied and interesting things.

According to a study by MyMove.com that analyzed U.S. Postal Service data, during the first six months of the pandemic, big cities lost the most people.

New York City, with the country's largest population at more than 8.5 million, experienced the highest losses. More than 110,000 residents left the city from February to July of this year.

That's 487% more than the number of people who left New York during the same period in 2019. And where did many of these people relocating set their sights? Smaller towns and suburbs.

In fact, as people snap up homes in the suburbs, housing inventories in those areas are dwindling faster than in urban areas, according to realtor.com®'s September Urban vs. Suburban Growth Report.

Currently, inventory is down 34.3% year over year in urban areas, while suburban inventory has declined 41.2%.

But despite all this, city dwellers are often hesitant to leave the hustle and bustle behind. Lifelong urbanites may feel that moving to the suburbs is accepting defeat, and they may have lingering assumptions about what they'll gain—and lose—by moving from a big city to a smaller town.

“People believe moving from the city is an isolating experience where neighbors are distant, nightlife is dull, and cultural experience is lacking,” says Lisa Collins, a licensed real estate salesperson for Julia B. Fee Sotheby's International Realty in New York.

But that's not always the case. Below, we bust some of the biggest myths about buying and owning a home in the suburbs.

Myth No. 1: Real estate is less expensive in the suburbs

Historically, the average listing price of an urban home has been higher than a suburban home. But these days, don't expect to hit the suburbs for a bargain.

During the pandemic, listing prices in the suburbs have actually grown at a faster rate than in cities, according to realtor.com.

Currently, the median listing price of suburban properties within the 10 largest metros is growing by 5.2% year over year. In urban areas, the growth rate is only 2.4%.

That's true in Fairfield County, CT, where prices have risen an average of 33% since September 2019, according to Debbie Rehr, a licensed real estate salesperson for Compass Westport in Westport, CT.

Rehr, who lives in Weston, CT, says this area is only an hour's drive from New York City and is attracting attorneys, financiers, entrepreneurs, and other affluent professionals looking for places to live, relax, and raise children.

Myth No. 2: The suburbs are boring

Moving to the suburbs means giving up all kinds of fun activities and resigning yourself to a boring, lonely existence in the middle of nowhere, right? Wrong!

In March 2020, Wendy Silverstein left New York City with her husband for Columbia County—about 120 miles to the north, closer to Albany—to stay in their cottage on a lake. She was wary that small-town life would be too slow, too quiet, and there would be a dearth of things to do.

Instead, she was pleasantly surprised by the activities available, and she's adjusted to the different pace of life. In her time there, she says she’s discovered delicious farm stand offerings and terrific markets.

“There are lots of interesting neighbors and opportunities to meet people,” says Silverstein. “I love the quiet, and you can drive into small towns and small cities for interaction.”

Collins, who lives about 20 miles north of New York City in Larchmont, says the pandemic has brought together many neighbors who are now working from home, for a new network of socializing and support.

“Our neighbors are gifted artists, musicians, writers, and teachers,” she says. “During the pandemic, our neighborhood created an outdoor movie night so that kids can socially distance and have fun.”

Also, being in the suburbs often means you're closer to the great outdoors.

“Just outside of town, you can go apple picking in orchards and wine tasting at vineyards,” says Collins. “Skiing at a small mountain can be as close as an hour away.”

Myth No. 3: There’s no culture

Leaving the big city means you're no longer down the street (or a short subway ride from) world-famous museums, Michelin-starred restaurants, and other great cultural resources. But it turns out, the suburbs give cities a run for their money.

“I think many transplants are surprised with how much good food, wine, public schools, health and wellness, shopping—even high-end fashion—is right in town,” says Rehr.

Collins says the reality is that the suburbs north of New York City are vibrant. The towns of Larchmont, Mamaroneck, and Rye, for example, have many restaurants, shopping, kids' activities, and cultural experiences within walking distance or within a short bike ride or drive away.

“There are hiking trails nearby, outdoor music on weekends, and our local colleges and high schools have educational and cultural programs to experience,” says Collins.

Even during a pandemic, Silverstein says there is an incredible amount of culture where she lives.

“Towns nearby are becoming more and more interesting, with bookstores, food stores, and art exhibits,” she says.

Myth No. 4: The commute will be a nightmare

Those thinking of moving to the suburbs but keeping their jobs based in the city might be apprehensive about a hellish commute. It might not be as much of a slog as you'd think, though.

“Work in midtown Manhattan? In Larchmont, you can take a quick drive or walk to the train station. The Metro-North train gets you to Grand Central Station in 35 minutes,” says Collins.

There’s also faster job growth in the suburbs, so you might end up finding work closer to home. Some 32% of U.S. jobs are in the suburbs of large metropolitan areas, according to the U.S. Bureau of Labor Statistics’ Quarterly Census of Employment and Wages.

In addition, remote work is likely to be here to stay even after COVID-19.

A study by the research and advisory company Gartner found that 82% of business leaders say their organizations plan to let employees continue to work from home at least some of the time, while 47% plan to allow employees to do so permanently.

For Mark Ross, founder of Ross NW Real Estate and professional real estate broker, real estate has always been the career of choice. During his 25+ years in the industry, Mark has gained experience in....

The Housing Market Is Hot But Not In A Bubble

Existing home sales came in at a whopping 6,850,000, beating estimates with the highest print since 2006. Days on market fell from 36 days to 21 days on a year-over-year basis. Cash buyers remain at

10 Ways To Enjoy Your Outdoor Living Space All Year

Some believe that the end of summer also marks the final days of enjoying outdoor barbecues, parties, and casual get-togethers. Yet, just by adding a few design elements to your outdoor space, you

You need to come up with some cash, fast. Maybe you have a leaky roof that desperately needs fixing or you need help paying for your kid's first semester of college. But where do you turn?If you're

These Pandemic Related Housing And Design Trends Are Not Going Away

Home trends come and go, but social distancing and staying at home have ushered in a new way of life—and some of those changes have spurred home trends that are likely to stick around well past

By registering, you agree to our terms of use and that real estate professionals and lenders may call/text you about your inquiry, which may involve use of automated means and prerecorded/artificial voices. You don't need to consent as a condition of buying any property, goods or services. Messages/data rates may apply.